Edit
watch 01:25
Jurassic World: Dominion Dominates Fandom Wikis - The Loop
Do you like this video?
Play Sound
Basics of Combat - by shkdru

Combat is an essential part of Stronghold Kingdoms™, and is the only way to defeat enemies and remove AI threats.

Troops are required to attack an AI enemy or another player, and are created in the barracks screen of your village. Each troop usually requires gold, a weapon and a free peasant. In all cases, barring armed peasants, before new troop types may be created, research is required. See Units and the research, Command.

To attack a target:

1. On the world map, select one of your villages by clicking on the yellow shield above it.

2. Next, click on the target you wish to attack.

3. A dialogue box will appear to the right of the screen, offering several options - select attack.

4. Choose which troops to attack with from the right-hand panel, and place them anywhere outside the white line of the castle.

5. Hold the left mouse button and drag to select groups of troops which are already placed. Right clicking will place these troops in a new area. By selecting catapults which are placed, you can direct their fire at a specific target.
Alternatively, you can load a saved attack formations. In order to save an attack formation, select manage formations on the left hand side after placing your troops and then select save formation. In order to load a saved formation, select deploy formation.

6. Once you are happy with your layout, click launch attack. 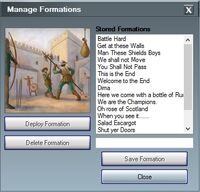 Various attack options will now be presented to you, depending on your research and your rank:

All attacks against human players cost honour - the amount is dependent upon the other player's rank; the higher your rank and the lower the rank of the player you are attacking, the higher the honour cost to you. You may go into negative honour (lose more honour points than you actually have) after an attack; however, you will not be able to attack again until you're back into positive honour.

Outgoing Attacks by clicking on the different columns in the top bar. These will allow you to sort the order in which the attacks are displayed by arrival time ,target village,source village and a specific type of unit.

on the World Map Screen,above the Map Filtering button, will open The Attack Targets Window.

The Attack Targets Window opens a screen which displays the 30 recent locations attacked on one side and the targets you have marked as favourite on the other. In order to mark a target as a favourite you will have to tick the star in the upper right corner before you send your attack. You can also mark places you have scouted as a favourite by ticking the star on the right side of the scouting screen.

Creating a well-defended castle is the key to Stronghold Kingdoms™. A weak castle may eventually be attacked, which could result in a lost village if the attack is a raze or capture. Successful AI attacks generally result in a loss of honour, plus goods and buildings if a pillage or ransack command is used.

Initially, upgrading the keep by researching Castellation will help to kill or weaken enemy units. Enemies need to reach the keep in order to raze the castle, therefore, defending the keep is absolutely vital. Researching Fortification allows access to wooden walls, stone walls and eventually, towers - all of which help to defend the castle. A well-constructed castle with stone walls and well-placed towers can withstand most attacks.

TIP: Only human enemies can capture or raze a castle.

TIP: The castle may not be completely enclosed without a gatehouse.